It was a big match today for the soccer fans. The derby between Manchester United and Manchester City is always a much hyped occasion for soccer fans everywhere, and this time with both the teams competing for the title it was a even bigger affair. Anyway, this post is not about the match but about controversy’s favorite soccer child Mario Balotelli. Mario was on fire today (just like the other day), and scored a brace in City’s 6-1 win. But I am here just to talk about the t-shirt he revealed underneath his jersey after scoring a goal. The t-shirt read “Why always me?”. Now what did he mean by that? Frankly I have no idea. But it seems to be catching up with the soccer fans. And why not? Love him or hate him, the kid sure is someone you can not ignore. 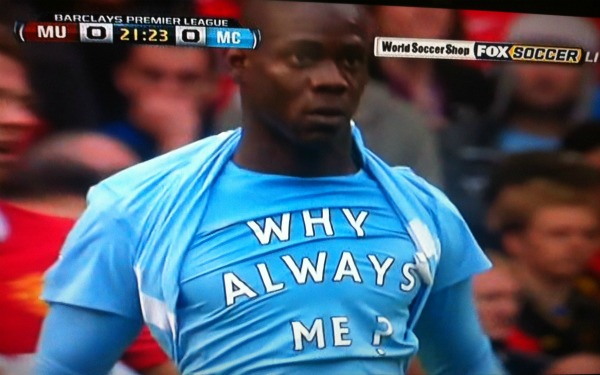 Anyway, if anyone is wondering where can they buy a similar shirt, I am yet to find an exact match for the T-shirt he was wearing but here are a couple of tees on similar lines. Will update this post as soon as I am able to find the real deal.

teevault 1.0 TeeVault.com is a t-shirt search engine and blog. If you have any other questions, please contact us at [email protected]